There are a lot of unglamorous things that involve pregnancy and losing your mucus plug is one of them.

During ovulation, our body produces mucus that helps sperm get to the cervix as well as create that ideal environment for conception. After fertilization, the mucus will then turn into a plug to seal the cervix and protect it from any infection, hence the name mucus plug.

What is a mucus plug?

Early on in your pregnancy, when the fertilized egg fixes itself to the walls of the uterus, your cervix produces secretions due to high levels of estrogen. This forms the mucus plug.

A mucus plug is found in the cervix entrance and acts as an antibacterial barrier between the fetus and everything on the outside. The mucus plug will stay in this area until just before you are ready to give birth or during birth.

Because of the progesterone hormone, the secretions will continue keeping the plug fresh. Your mucus plug is different from normal hormonal vaginal discharge during your regular cycle and also different from regular pregnancy discharge. A mucus plug is a lot thicker and there is also more of it.

A mucus plug contains lysozymes and antibodies, which can destroy bacteria walls and neutralize viruses. Because of its antibacterial properties, it won’t only act as a physical barrier, but it will also kill harmful bacteria found in the vagina or any other infection that may come from sexual activity or vaginal exams.

In other words, a mucus plug is vital to keep your baby alive and healthy.

Related: What Are Braxton Hicks Contractions?

The mucus plug has a very thick and gelatinous consistency while in the cervix. Some would compare mucus plug to snot from your nose or even a jellyfish. There are also times that when it does come out, it becomes thinner and more like liquid.

The mucus plug comes in a variety of colors. It could be yellowish/cloudy white, clear, but it may also have streaks of pink in it and it may also be slightly bloody. Some are also colored beige or brown or a mix of different colors.

Keep an eye out though if there is more blood than mucus since it could imply other complications like placenta previa or placenta abruption and so you should immediately consult your physician.

How big is the mucus plug?

It is the size of a quarter, about 4 to 5 centimeters long, and equivalent to around two tablespoons of mucus or 1 ounce.

When do you lose your mucus plug?

When you are about to go into labor or as the labor process progresses, the cervix walls will thin out and also dilate which may cause the mucus plug to be released.

This opening of the cervix is caused by the baby “dropping” into the pelvis. This triggers the cervix to prepare for labor and soften, getting rid of the mucus plug.

There is usually no pain that accompanies the passing of your mucus plug although on rare occasions, some women would have lower abdomen pain similar to the pain felt during menstruation.

Times when you may lose your mucus plug:

Some women may notice their mucus plug when they use the bathroom, so don’t be alarmed when you do see it either in the toilet bowl, on your underwear, or on the tissue.

You may also see it come out while taking a shower. On the other hand, some women won’t even notice their mucus plug at all since vaginal discharge are common during pregnancy.

If you have had children before, it would mean that the cervical canal is wider than when you had your first pregnancy. This means first-time moms are more likely see blood with their mucus plug compared to moms that have already had babies.

Can you have sex after losing your mucus plug?

Another question that some women might have is can you have sex after losing your mucus plug. Most of the time, if everything is going along fine and you don’t have group B strep or placed under pelvic rest, then it is perfectly fine to have sex even after you have lost your mucus plug.

Sometimes, you can even lose your mucus plug during sex. Having intercourse is also another way of speeding up the labor process and whether or not you want to do this, the decision is entirely up to you. If you feel unsure about it, you can always consult your physician as well to make sure everything is okay.

The bloody show vs. mucus plug

The bloody show and mucus plug are often mistaken for the other but it is not the same thing. A bloody show will always have mucus plug and is often stringy but mucus plug will be thick and won’t always be a “bloody show”.

What happens after you lose your mucus plug?

After you lose your mucus plug, you could soon go into labor especially if you are close to your due date.

Cramping after losing mucus plug could also mean you are going into labor. If you are still weeks away from your date, it could just mean that your mucus has regenerated and it would mean that you would be having new mucus plug.

Losing your mucus plug during early pregnancy could also mean a preterm birth so always inform your birthing team when this happens to get the right information and care.

You don’t need to worry about your baby not being protected once you do lose your mucus plug since by this time, there is still the amniotic fluids that will provide this protection until you are ready to give birth.

You can also take some extra precaution and change your underwear often and be on top of your personal hygiene, or keep away from swimming pools/beach. You can do this just to make sure that you are eliminating any risks for infection.

Keep an eye out for these symptoms (or any other symptoms that you feel is not normal) when you do lose your mucus plug and inform your doctor right away when you experience any of these:

Related: How To Prevent Tearing During Labor

How long after losing your mucus plug will labor start?

Some people might say that once you see your mucus plug that labor will start for sure. This isn’t always correct. There is no definite time as to when you will start going to labor once you lose your mucus plug. Each body and pregnancy is different.

It could mean labor might be hours away, days away, or even weeks away. If it is your first time having a baby, it might still be days or weeks away before you go into labor while if you have already done this a couple of times, there’s a greater chance you are already going into labor once you lose the mucus plug.

You would also need to take note of the other signs of labor before you can be sure that labor is coming. If you do see your mucus plug then experience contractions that are 5 to 7 minutes apart or your water breaking, this most likely means that the labor process is starting.

Sometimes you won’t even see your mucus plug but once your water breaks, it certainly means that your mucus plug is no longer there and that you are already starting labor.

Whatever the case is, when you do see that you have lost your mucus plug, it is also a good idea to get some rest, relax, and prepare yourself for imminent labor so that you won’t be too exhausted when labor actually comes.

You are almost there mama! 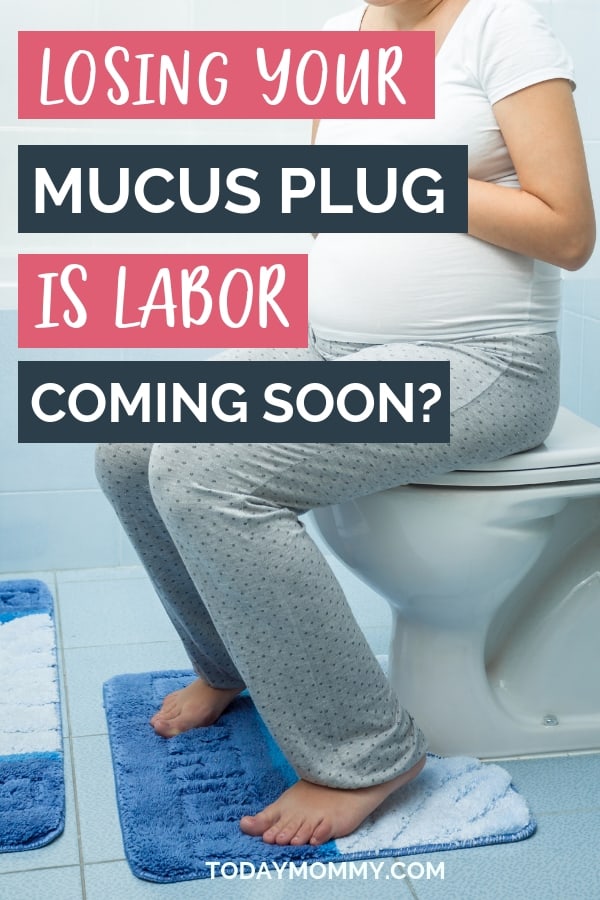 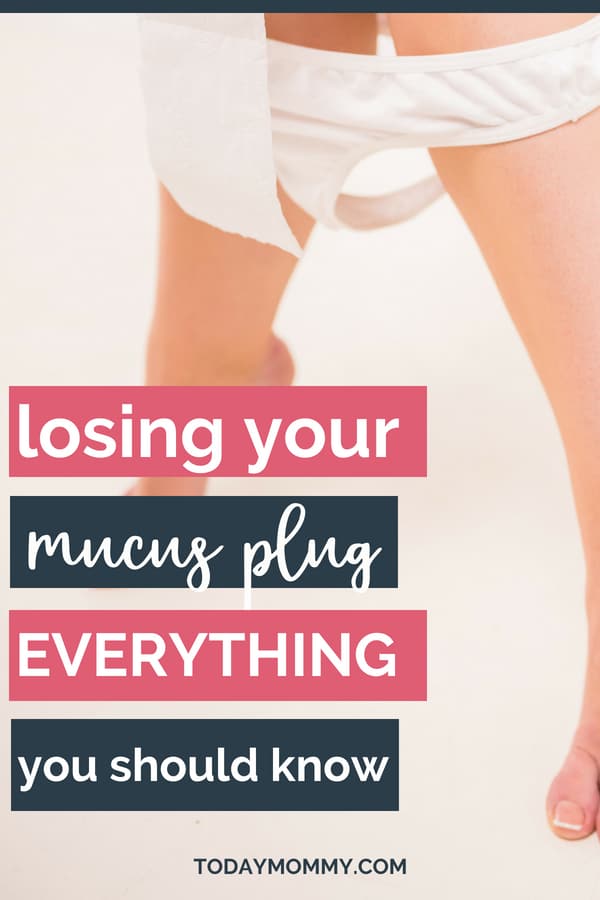 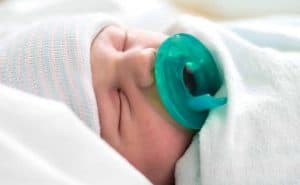 The 8 Best Pacifiers For Breastfed Babies 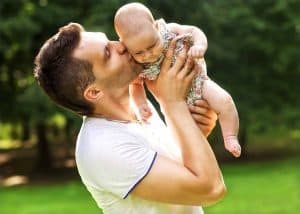 How To Help Your Husband Bond With Your New Baby 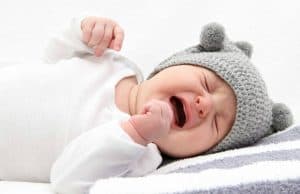 Gas Relief For Babies: How To Stop Infant Gas Pains

Disclaimer: All content on this site is written for informational purposes only. Under no circumstances should any information from this blog be used as replacement for professional medical, financial, or legal advice. All information or ideas provided should be discussed in detail with an advisor, accountant, doctor or legal counsel prior to implementation. TodayMommy.com is owned by MMC Media, LLC and neither are licensed by or affiliated with any third-party marks on this website and third parties do not endorse, authorize, or sponsor our content except where clearly disclosed. TodayMommy.com is a participant in the Amazon Services LLC Associates Program, an affiliate advertising program designed to provide a means for sites to earn advertising fees by advertising and linking to Amazon.com.